Found a bug? Report it here or check our code!

Shadow Hunters is an online multiplayer game (based on the board game of the same name) in which players assume the identities of characters belonging to three opposing factions. The Shadows, inhabitants of the underworld, aim to destroy all Hunters, while the Hunters, protectors of the mortal realm, seek to banish the Shadows. Neutrals, caught in the crossfire, pursue their own hidden objectives.

As night settles on the ruins of abandoned town at the edge of a mysterious forest, the identities of ally and enemy alike are obscured by a shifting fog, and players must discover who is friend and who is foe before striking from the darkness!

How to Start a Game

In the process of playing the game, players with inconsistent Wi–Fi connections may be disconnected from the game server. Those players will be redirected back to the main page, and in the game they will be replaced by a CPU player. Disconnected players can easily reconnect and tag in for their CPUs by rejoining the same room, with the same username, from the main page. If all players leave a game, it will be terminated.

If a player attempts to join a room with a game already in progress, they will begin spectating that game – they can talk with other players in the chat and see what’s happening, but cannot otherwise influence the game. 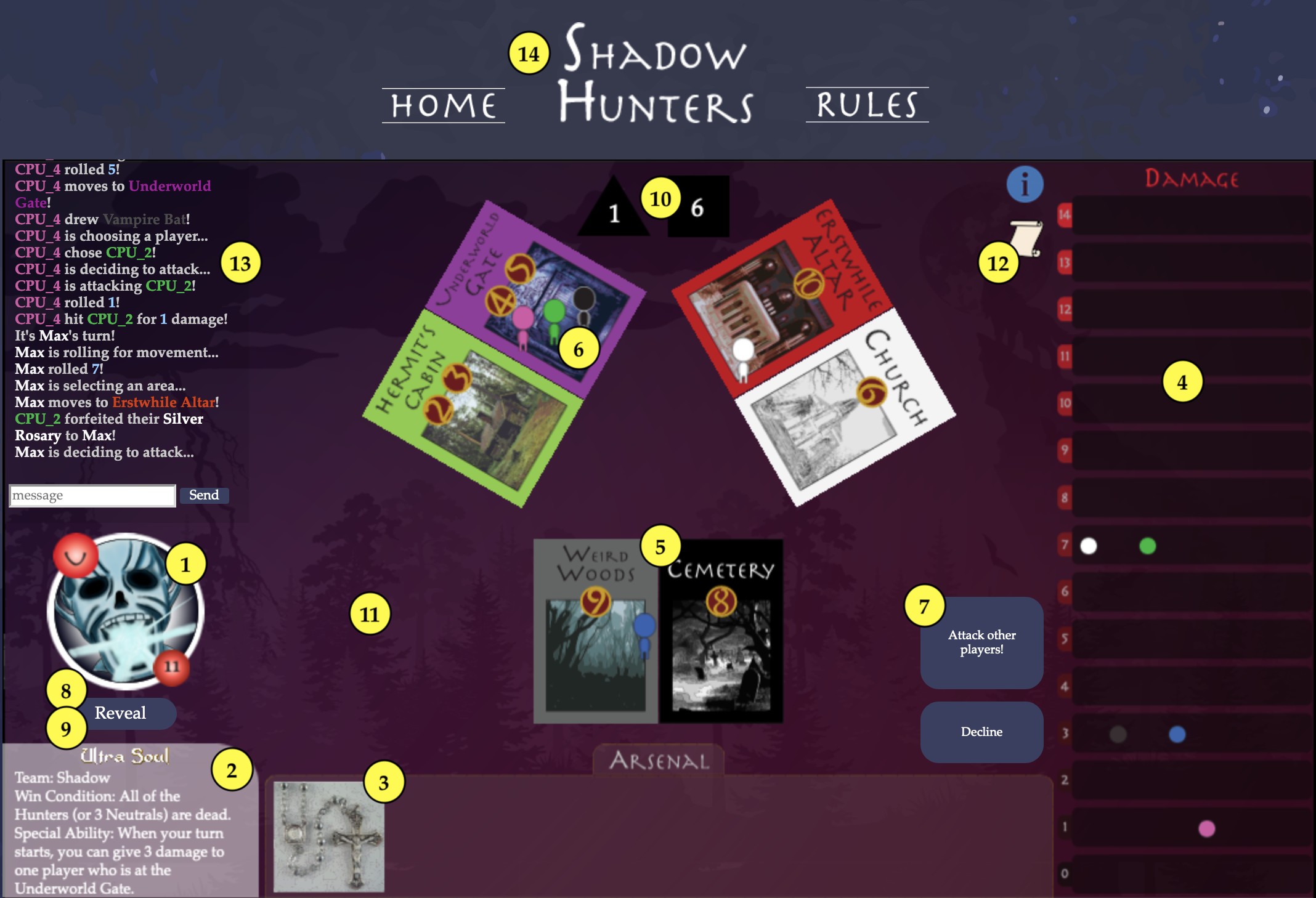 Once the game has started, the Shadow Hunters game board will appear in front of all players. It is pictured above. Highlighted numbers identify its various pieces:

Shadow Hunters is played in a series of turns. On each player’s turn, they will roll for movement, perform their area action, and may attack other players. The turn order is randomly determined when the game starts, and play will continue in that turn order until one or more players have satisfied their win condition, at which point the winners will be declared and the game will end!

At the beginning of the game, players are only aware of their own character identity – they do not know who might be a potential ally and who is a threat. During their turns, players can attack, heal, build up their arsenal, and discover the allegiances of others, depending on the roll of the dice and the luck of the draw. Once players have identified their friends and foes, they can play more strategically in pursuit of their win condition!

Every game is a little different – the area cards are shuffled, as are the three decks. Characters are distributed randomly to each player, but each game contains a set number of characters from each faction, depending on the total number of players. These numbers are as follows:

A list of the playable characters is provided at the bottom of this page.

If the dice sum to 7, then the player can pick any area other than their current area to move to – there is no area card with a 7 on it.

Once a player has moved to an area, they may choose to perform the unique action associated with that area. The actions for each area are:

Prompts will appear on the board for the corresponding area action after a player moves to an area.

After a player has completed their area action, they may attack a player in the same zone as them. Each pair of area cards on the game board represents a single zone.

If the player chooses to attack someone, they roll both dice and deal damage equal to the difference between the rolls. If the difference is greater than zero, the attack is considered successful – this is relevant for some equipment cards and special abilities.

Once a player has attacked, or chosen not to attack, their turn is over and the next player begins.

Shadow Hunters features three decks of cards, which are not pictured on the game board itself: the Hermit Deck, the Black Deck, and the White Deck. Players can draw these cards if they move to the Hermit’s Cabin, Cemetery, Church, or Underworld Gate.

Instructions generally take the form of, “I bet you’re a Shadow. If so, receive 2 damage! ” In this way, when the chosen player follows the instructions, the player who used the Hermit Card learns something about them!

If the instructions do not apply to the chosen player, then nothing happens.

Black Cards and White Cards come in two different types: Equipment and Single–Use. The type is displayed on the card when it is drawn.

If any deck runs out of cards, the discard pile is shuffled and becomes the new draw pile for that deck. There are 16 cards in each deck.

At any point during the game, any player may click the button below their character portrait to reveal their identity to everyone else in the game. From this point forward, other players will be able to see information about the revealed player’s character by clicking on their sprite, or opening the game summary tab.

While it is generally useful to keep one’s identity hidden, once a player has revealed they may use their character’s special ability, and the “Reveal” button will be replaced by a “Special” button. Each character in Shadow Hunters has a unique special ability.

When players take damage from attacks or cards, their colored token moves on the HP bar to reflect their current damage.

If a player’s damage reaches or exceeds their character’s maximum HP (displayed in a red circle next to the character portrait), they will die. If the player had any Equipment Cards, the killer chooses one to steal, and the rest are discarded.

Dead players will have their turn skipped, but they can still win if their win conditions are satisfied (for example, if a Hunter dies, but the remaining Hunters kill all of the Shadows, all of the Hunters win).

Dead players who leave the game will not be replaced by a computer player, and will not be able to reconnect to the game.

As soon as any player has satisfied their character’s win condition, the game ends immediately and that player is declared the winner. It is possible for many players to win simultaneously, even if they are in different factions, if they all satisfy their win conditions at once.

A popup will show the identities of the winning players. The chat can still be used after the game is over, but a new game can only be started by returning to the main page and joining a new room.

We sincerely hope you enjoy playing Shadow Hunters! With love from the team,

A list of all playable characters, with their names, factions, maximum HPs, win conditions, and special abilities, is provided below:

Name: Ellen
Faction: Hunter
Maximum HP: 10
Win Condition: All of the Shadows are dead.
Special Ability: Once per game, when your turn starts, you can choose a player and permanently void their special ability.

Name: Franklin
Faction: Hunter
Maximum HP: 12
Win Condition: All of the Shadows are dead.
Special Ability: Once per game, when your turn starts, you can pick a player and damage them for the roll of a 6-sided die.

Name: Fu–ka
Faction: Hunter
Maximum HP: 12
Win Condition: All of the Shadows are dead.
Special Ability: Once per game, when your turn starts, you can set the damage of any player to 7.

Name: George
Faction: Hunter
Maximum HP: 14
Win Condition: All of the Shadows are dead.
Special Ability: Once per game, when your turn starts, you can pick a player and damage them for the roll of a 4-sided die.

Name: Ultra Soul
Faction: Shadow
Maximum HP: 11
Win Condition: All of the Hunters (or 3 Neutrals) are dead.
Special Ability: When your turn starts, you can give 3 damage to one player who is at the Underworld Gate.

Name: Valkyrie
Faction: Shadow
Maximum HP: 13
Win Condition: All of the Hunters (or 3 Neutrals) are dead.
Special Ability: When you attack, you only roll the 4-sided die and inflict the amount of damage rolled.

Name: Vampire
Faction: Shadow
Maximum HP: 13
Win Condition: All of the Hunters (or 3 Neutrals) are dead.
Special Ability: If you attack a player and inflict damage, you heal 2 points of your own damage.

Name: Werewolf
Faction: Shadow
Maximum HP: 14
Win Condition: All of the Hunters (or 3 Neutrals) are dead.
Special Ability: After you are attacked, you can counterattack immediately.

Name: Allie
Faction: Neutral
Maximum HP: 8
Win Condition: You're not dead when the game is over.
Special Ability: Once per game, you may fully heal your damage.

Name: Catherine
Faction: Neutral
Maximum HP: 11
Win Condition: You are either the first to die or one of the last two players alive.
Special Ability: When your turn starts, you heal 1 damage.

Like Shadow Hunters? Support the game by donating! Any amount is appreciated.